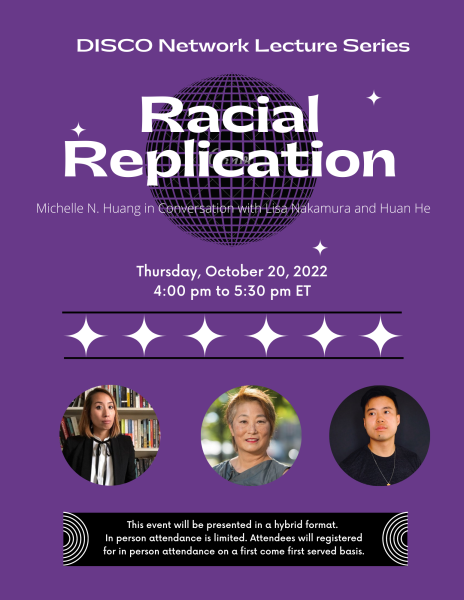 Asiatic interchangeability is made, not born. In her talk, Michelle N. Huang discusses how dystopian clone narratives challenge notions of individual racialized identity at both the genetic and generic levels. Drawing on Saidiya Hartman’s concept of racial fungibility, Huang will examine Kazuo Ishiguro’s Never Let Me Go (2005) and Larissa Lai’s Salt Fish Girl (2002) to trace how Asian American interchangeability is produced through reproductive control as well as an economy of character. In rearticulating, rather than rejecting, notions of shared subjectivity, hivemind, and fellow feeling, Asiatic clones ask for experimental alternatives to the ethnic bildungsroman and demonstrate the novel form itself to be a racialized technology of identity.

Lisa Nakamura is the Gwendolyn Calvert Baker Collegiate Professor of American Culture and Digital Studies at the University of Michigan. She is the author of several books on race, gender, and the Internet. She is the founding Director of the Digital Studies Institute at the University of Michigan and the Lead P.I. for the DISCO (Digital Inquiry, Speculation, Collaboration and Optimism) Network (disconetwork.org).

Huan He is a Curriculum Development Fellow at the DISCO Network Michigan Hub and holds a PhD in American Studies and Ethnicity from the University of Southern California. Most broadly, his research engages Asian/American literature and culture, histories of media and technology, visual culture, digital game studies, and poetics. His book project, currently titled, “The Racial Interface,” explores the racial associations linking Asian/Americans and information technology in the digital era. Drawing from literature, art, and archival sources, this project reveals how myths of racial and technological progress converge in the shadow of U.S. liberal capitalism. He foregrounds minoritarian writers and artists who challenge the dominant technological imaginaries shaping the digital present. He is also interested in the relationship between race, gaming, cheating, and scams and pursuing a second project on these topics. His scholarly writing has been published in College Literature: A Journal of Critical Literary Studies and Media-N and is forthcoming in an anthology on Asian/American game studies. In Fall 2023, he will start as an Assistant Professor of English (Asian American and Asian Diasporic Literature) at Vanderbilt University.

We want to make our events accessible to all participants. This event will be a hybrid event with both a physical meeting space and an online meeting space. Please register in advance for the online Zoom Webinar here: https://bit.ly/3CcvgFL

Please register for the physical meeting space at the University of Michigan’s Central Campus: https://bit.ly/3R2S3bG

We will have automated captions. If you anticipate needing accommodations to participate, please contact the DISCO Network at disconetwork@umich.edu. Please note that some accommodations must be arranged in advance and we encourage you to contact us as soon as possible.

To submit an event to our calender send an e-mail to dsi-administration@umich.edu.

© 2022 Regents of the University of Michigan